Originally posted here on July 24th, 2016.
Yesterday afternoon, I was kicked out of the tribe for voicing my concerns that Teal’s healing methods could lead to False Memory Syndrome, and for linking to this article by Michael James. For those of you who never got a chance to read it, my post is below, followed by a summary of the events leading up to the removal. For those of you who already know what happened, you might want to scroll down a bit.

(A side note: A part of me cringes when I read that sentence about the woman being “unstable and delusional.” I wish I had found a gentler, more compassionate way to say that. In fact, I wish I could have made my point without sharing her story at all, but I felt it was too important. But my point is this: She is the victim here. I don’t want to sound accusatory or draw any negative attention to her. It’s about Teal and her methods.) 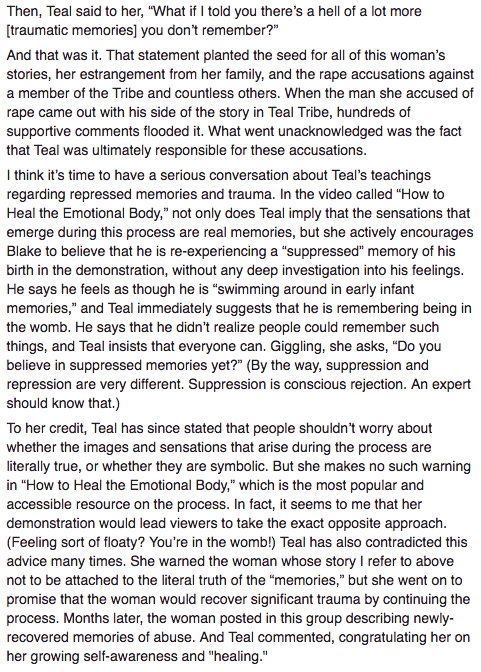 (If you haven’t watched “How To Heal The Emotional Body,” you can do so here.)

I received many thoughtful comments. Naturally, some of you strongly disagreed with me for holding Teal accountable, but every single reply was respectful, and I felt that my words gave way to some wonderful conversations and insights. Knowing that I was bringing up a very controversial and emotionally charged issue, I felt pleasantly surprised and very appreciative of the overall response. Thanks, everyone!

Yesterday morning, Teal left a few comments below my post. I replied to her soon after. Notice how she refers to Mr. James as a friend.

I am still not sure how conflicts over the truth or falsehood of abuse memories “ruin” anything, especially when the consequences of such memories and beliefs are so serious. But, anyway. My second reply:

Immediately after I wrote this second comment, I couldn’t view my post anymore. I realized that I had been kicked out of Teal Tribe. Wow. Why? My post was controversial, but I had been kind and polite to everyone. There hadn’t been any arguments. It happened so fast that I don’t know whether Teal even read my replies.

Later, I found out that she had deleted the thread and made this follow-up post:

Some things to think about…

I found Teal’s post and earlier comments very interesting, and they inspired the following ideas and questions:

Finally, I want to offer a quote from Teal’s blog, “Cult or Movement?” This is one of the ways Teal differentiates her group from a cult:

“Questioning is encouraged; doubt is seen as normal and a healthy part of expansion…A call to discover personal truth. Dissent does not lead to punishment. People are welcomed in the group even if their opinion varies from my own or other members’.”
Is it true?
Thanks for reading, everyone! I hope you will consider these questions. Though I have spoken critically of Teal, I do wish her the best. It saddens me that she is so easily hurt, and that she seems to bring so much drama upon herself.

I haven’t posted this to complain about the injustice of my removal. I no longer want to be a member of Teal Tribe, though I hope to keep in touch with many of you. I just wanted to document the incident and and share my perspective, to provide some contrast to Teal’s deflection. Many of you won’t agree with me, of course, and that’s okay.

Be well.
Have a wonderful day.
And remember…

Update: Why am I blaming Teal? How serious is the risk of FMS? Who is Barbara Snow?

I’ve realized that I haven’t backed up my claims about Teal’s methods very thoroughly. A few people who have commented in Teal’s defense seem to think that I’m jumping to conclusions and “slandering” her. For those of you who don’t feel that Teal should be held responsible, I want to say that there is no doubt in my mind that she played a major role in this. The woman I mention in my original post has stated in Teal Tribe that Teal’s advice (“What if I told you there’s a hell of a lot more you don’t remember?”) actually caused her to wonder whether a particular family member had abused her as a child. This post should still be available in the group if anyone doesn’t believe me. I have no doubt that Teal’s words affected her deeply.

We meet with spiritual teachers because we trust their guidance. We believe in their wisdom and power. As followers of Teal, we believe that she is a special soul who has overcome enormous obstacles to find happiness and stability. We believe that she can see our thoughts, our energy, and our futures. Because she tells us that she can. Of course this woman took Teal’s advice seriously. Of course Teal’s words influence her followers. Is it so wrong to expect her to use that influence carefully?

I also feel as though the people who are still defending Teal are underestimating the danger and prevalence of false memories. So, here are some resources:

One therapist named Barbara Snow allegedly implanted false memories of satanic abuse and military testing into the mind of her sister-in-law and persuaded her niece that her father had molested her, in addition to several other forms of unprofessional conduct. If the name Barbara Snow sounds familiar to you, it may be because she has already been mentioned here and here. Because Teal Swan was her patient. The fact that Snow treated Teal has been verified in private conversations, which can’t be published, unfortunately. But I am certain that Snow treated her. And it appears that she may have inspired some of Teal’s techniques.